With precision to the stars 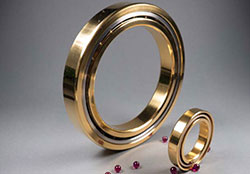 The Atacama Desert in Chile is the driest place in the world and is also the location to the Paranal Observatory. From there it is possible to investigate heavenly bodies that are well outside our solar system. IBC Wälzlager GmbH from central Hessen provides the precision that is required to take photographs with an angular resolution of a thousandth of an arc second.

The heart of this unit that is operated by the European Southern Observatory (ESO) is the Very Large Telescope (VLT). It is the most advanced optical instrument in the world and has provided more discoveries than any other telescope. Among other things, the VLT was responsible for the first ever picture of an exoplanet, a heavenly body that is in another planetary system. A journey to this heavenly body would take around 76,000 years if travelling at a speed of 62,000 km/h.

It takes incredible precision to get pictures with high resolution of something at that distance. The temperature of the unit is regulated to –193°C by a continuous flow system and without any loss of electrical performance so as to maintain a clear image. IBC Wälzlager guarantees precise positioning of the optics through its ruby and tungsten carbide ball bearings and its high-precision angular contact ball bearings with gold-coated rolling bearing rings. This combination of materials ensures the highest thermal conductivity and the lowest friction at -193°C.

We use cookies on our website. Some of them are essential for the operation of the site, while others help us to improve this site and the user experience (tracking cookies). You can decide for yourself whether you want to allow cookies or not. Please note that if you reject them, you may not be able to use all the functionalities of the site.